We visited the Outer Hebrides of Scotland after a few months of planning to finally explore this exceptionally beautiful part of the world. But before we unleash a barrage of white sand beaches, turquoise waters and gorgeous landscapes, we wanted to share what we learnt about one of Scotland’s most famous exports now in massive demand in the fashion world – Harris Tweed. We took an extensive daytrip around the Isle of Harris with Kathleen from Harris Scenic Tours (website and Facebook page, highly recommended, full review in next post) and our only ask for them was to give us a behind-the-scenes look at Harris Tweed, if possible. They arranged for two stops to make fulfill that request.

Just outside the Clo-Mor building in Drinishader on a warm day!

What is Harris Tweed?

Old newspaper ads with the definition of Harris Tweed

The one thing we truly started to appreciate about any Tweed product is that not only does it has a few colours intricately woven, but also that it looks significantly different in sunlight than indoors.

Where we visited to learn about Harris Tweed

One of our stops was Clo-Mor in Drinishader (website) – a Harris Tweed exhibition (where Dalek had been once before). Our visit this time almost opened a secret level as the employee running the gift shop (Marilyn Johnston) talked about Marion Campbell, an icon of Harris Tweed Weaving, through photos and her equipment. 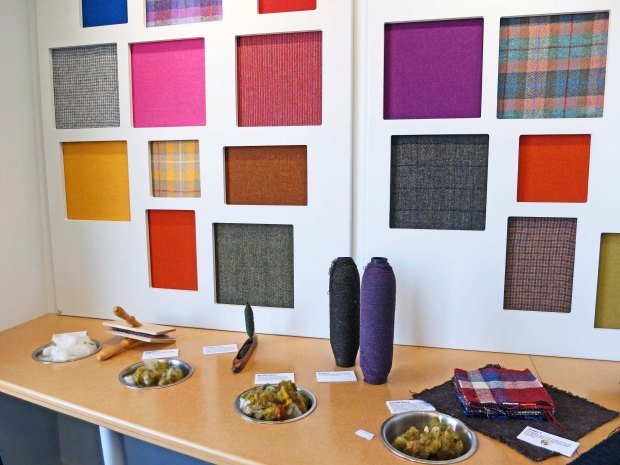 The different stages of converting fleece to tweed

The other special stop that Kathleen arranged for us was visiting Rebecca Hutton of Toabh Tuath Tweeds, a present-day Harris Tweed weaver and a very fun person to meet who gave us so many details about her setup. This post details what we learnt about Harris Tweed and why we have a new found appreciation for this beautiful fabric.

The technical definition of Harris Tweed only entails the weaving to be done by an islander at their home and the rest of the process to be completed on the Outer Hebrides (in practice, done by different people / large scale mills today). One of the reasons Marion is an icon is because she single-handedly oversaw the entire process starting from the rearing of the sheep that provide the wool all the way up to creating the final Tweed length. The only task she wasn’t in charge of was stamping her tweeds with the Orb mark! Her participation in the whole process is captured through a set of fascinating photographs on display at the exhibition (visible partially in the picture below). 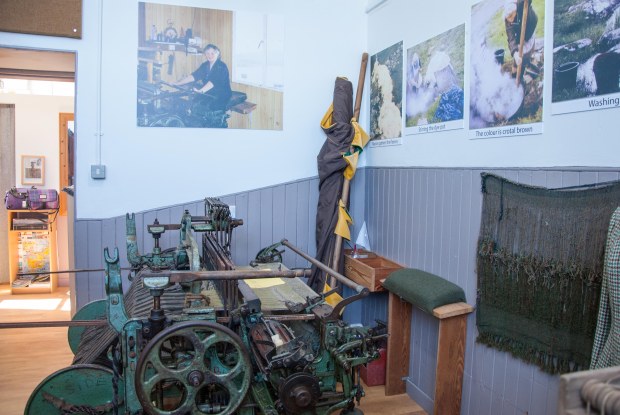 Here’s Marion using her loom which has been preserved as part of the exhibition. Her age at the time of this video is either 76 or 77 and is another example of how hard working Scottish Islanders are. If one needed any proof of how much of Marion’s work was ingrained into the local community, they only need to know that when awarded the British Empire Medal (wiki), on of the UK’s highest civilian awards, she did not collect the medal from Buckingham Palace in London stating that the medal belonged to the whole of Harris and not to her individually. ❤

The coat in the middle is over 90 years old and of immaculately high quality still (Yoda didn’t dare touch the fabric).

Almost all the colours that Marion used were 100% natural and one of her instruments to gather lichen to make her own dye was this spoon. There is also a single colour on display that Marion was never able to replicate naturally and had to use a readymade dye for instead.

Marion used a spoon to colour her fleece

Becca (as Dalek knew her as while inadvertently chatting with her the day before on the bus) is already a star among the present day weavers (winning awards for her tweed) and explained how her Hattersley MKII loom works in a very logical manner. She was working an absolutely beautiful length of tweed and the image below shows the different stages in which an in-progress tweed looks like. Becca is fittingly also the star of the “Weave your own story” video on the VisitScotland channel.

A close up of her loom. Also Legos!

Rebecca’s Orb label showcase – have you seen the Centenary label?

However, for us, there was no better explanation of the tweed-making process than a wee comic strip that the primary school kids drew out for her in Gaelic titled “Becca a’Breabadaireachd” or Becca the Weaver – from shearing the sheep, buying the yarn, drinking her tea and getting the stamp. We can attest that her red van is quite accurate. She is also moving to make tweed products like lamp shades, something we are going to keep tabs on to buy one. Becca is a super-cool person, Yoda and Becca are two Coca-Cola superfans who were reminiscing of their trips to the World of Coca-Cola in Atlanta.

Which Harris Tweed products did we buy and where?

Two accessories that are difficult to find outside Harris – a pair of earrings (modelled elegantly by Yoda below) and a Harris Tweed tie for Dalek (to match with a future Tweed suit). We bought these from the Clo-Mor gift shop which has a pretty extensive collection of items (from where Dalek had previously bought a tweed passport holder).

Yoda elegantly models her newly bought Harris Tweed earrings from the Clò-Mòr exhibition and shop at Drinishader, Isle of Harris (a must visit on the island, @harristweed_harris for details). #harristweed #isleofharris #travelblogger The exquisite patterns and colours are a result of an involved traditional process which we were lucky to see up close. 📌Seilebost beach, Isle of Harris, Scotland P.S. this is Yoda's first picture on this account!

We also already own a Harris Tweed handbag bought from the Inverness city centre store (Facebook page) and a passport holder from Clo-Mor. There is a big selection at the store next to the Isle of Harris gin distillery. And with high-end designers making some fantastic high-end products with Harris Tweed, the future looks bright! 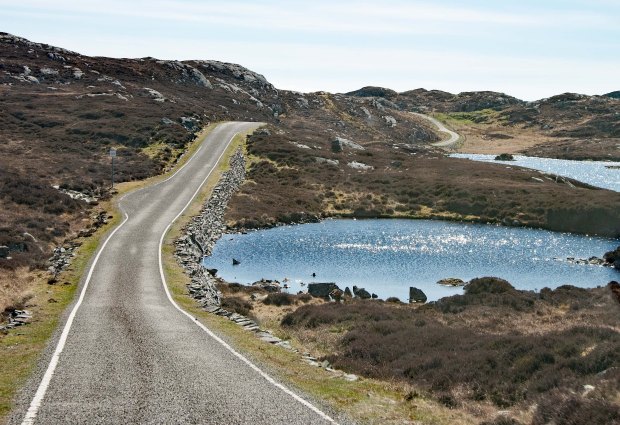 Like the road that leads to Clo-Mor, the road ahead of the Harris Tweed industry is Golden

Truly from Croft to Catwalk

FAQs about the Harris Tweed